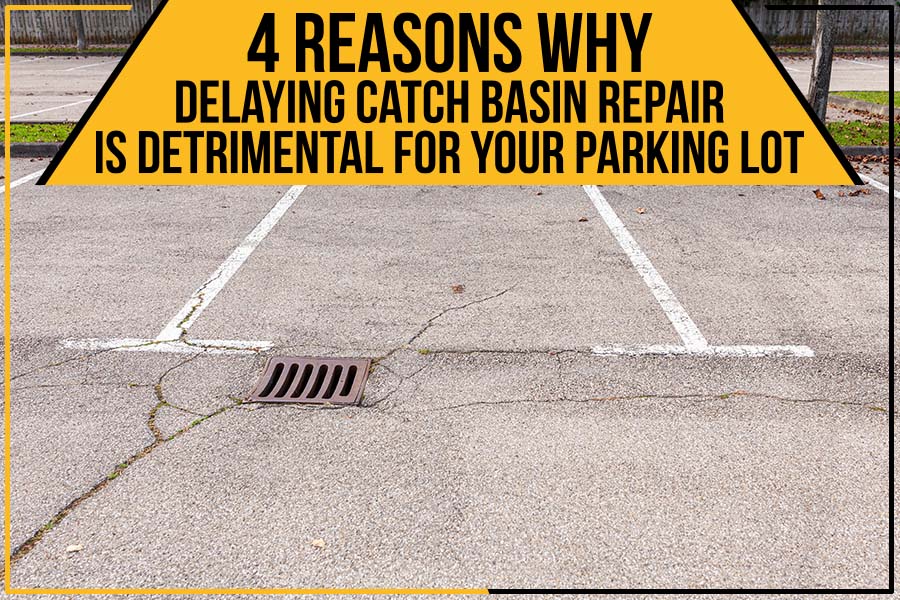 Catch basins are an effective way to prevent flooding on parking lots by redirecting water runoff. They collect rainwater or melted snow and transport it away from the lotto to avoid flooding. They are designed to filter out large debris through the grates on the outgoing pipes while collecting water in an underground tank. When the tank reaches its capacity, the accumulated water then redirects to another reservoir, sump, or municipal service before being treated at a treatment plant.

Given the importance of catch basins in a parking lot, we should expect the property owners to pay particular attention to their upkeep. However, it often becomes a case of out of sight, out of mind, for the property owners. Therefore, this blog post discusses four critical problems that can arise from neglecting catch basin repair and maintenance.

Water can be one of the most damaging elements to asphalt pavement because it has many adverse effects on pavement performance. Moisture damage decreases strength and durability, reduces skid resistance, degrades rutting properties, increases the potential of cracking, and speeds up deterioration processes in an already weakened asphalt mixture due to the presence of water.

You should hire expert professionals like The Pavement Group in Raleigh, NC, for prompt asphalt repair.

Some of the most common issues due to moisture penetration include:

Cracks can form very quickly due to water permeation. These cracks are often called “Diagonal Cracks” or “Horizontal Cracks” as they appear to run diagonally across the surface of the tar seal.

This involves debonding of aggregate and binder from the pavement’s surface due to friction between vehicle tires and pavement, resulting in smooth/rough surfaces or ruts.

This is a surface depression along the wheel path; this irregularity can cause a “bump-steer pulse,” leading to degradation of ride quality.

A binder film, or asphalt bleeding as it is commonly called, occurs when significant quantities of the liquid components of bituminous mix separate from the solid and migrate to the surface.

Catch basins prevent contaminants and debris from entering your drainage system. They avert the choking of drainage systems, which significantly reduces the likelihood of flooding in your parking lot.

The first sign that a storm drain is failing is the appearance of a sinkhole near it. This happens when there’s an opening in its side, like cracks or holes, which allow water to flow through and escape underground without being filtered by stones around them. The rushing water washes away stones beneath the pavement surface, creating areas where they are eroded below ground level leading to dangerous sinkholes!

Call The Pavement Group for prompt service if you are from around Raleigh, NC and need immediate catch basin repair.

Get a free pavement quote now.

Winter Is Coming! – 3 Tips To Prepare Your Parking Lot

Asphalt Compaction – What Happens If It Goes Over Or Under?

Get a FREE Pavement Quote Now!
Chat with a Live Agent

We are a Full-Service Pavement Management Company

Download Our FREE E-book
“Your Guide To Eliminating The Painful Task Of Creating Your Pavement Budget”.